We know that cannabis is an exceptional plant with a wide range of uses in a variety of industries and in recent times we keep hearing about its medicinal properties. In this context we mostly hear about CBD, but it is hardly the only medicinal substance present in cannabis. These active substances, like CBD, are called cannabinoids. They are typical for the cannabis plant, and a large part of them are called minor cannabinoids, due to their lower concentrations present in the plant. It’s time we talked about them as well.

The mother of all cannabinoids

Let’s begin the topic of minor cannabinoids with CBG or cannabigerol. Often called the stem cell cannabinoid, or the mother of all cannabinoids, due to the fact that all other cannabinoids are created by the degradation of CBG, during the maturing process of the plant.

Similar to CBD, CBG is found in the plant in acid form - CBGA, until heated at which point it turns into CBG. CBG is non-psychoactive, again similar to CBD. This is due to the fact that both molecules work on neurological pathways indirectly, instead of the direct interaction with CB1 receptors, associated with the psychoactive Delta-9-THC.

What CBG demonstrates are a variety of potential therapeutic benefits, without a psychoactive effect. For this reason, CBG gains popularity around the world of cannabis only recently, and will likely be one of the first minor cannabinoids you’ll see advertised in cannabinoid products. 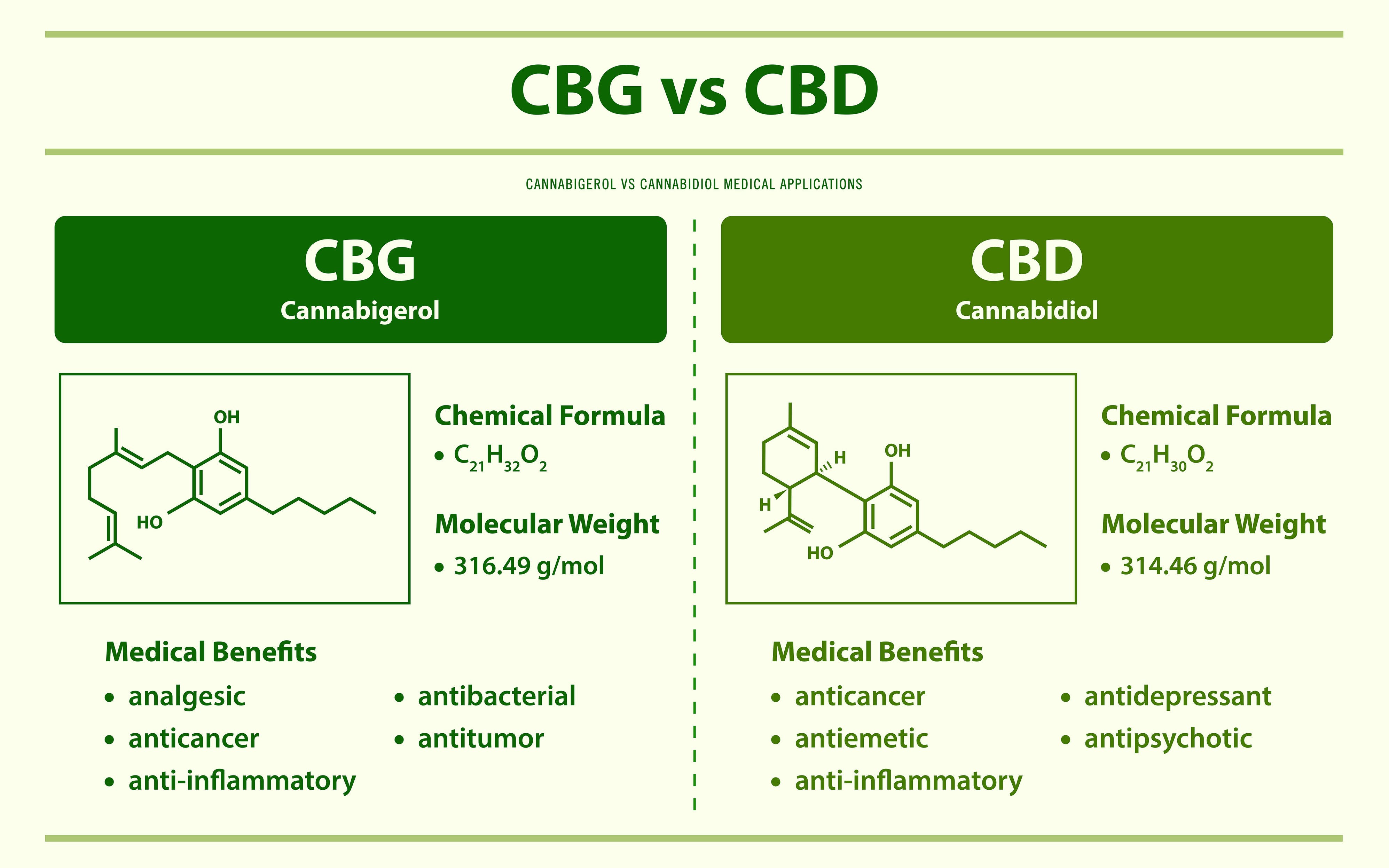 CBC or cannabichromene is especially mysterious even in the context of the other barely studied substances. This is mainly due to the low content of CBC in cannabis varietals, due to it being created by a recessive gene, which only comes up in specific conditions.

Just like CBG and CBD, CBC interacts with the Endocannabinoid system indirectly and as a result it doesn’t cause intoxication when consumed. Despite that, it can naturallt affect mood by improving the activity of endocannabinoids anandamide and 2-AG.

This cannabinoid also supports the activity of other cannabinoids through the Entourage effect, which allows stronger therapeutic benefits than major cannabinoids like CBD, in smaller doses.

CBN or cannabinol differs from other cannabinoids with it’s common association to the freshness of cannabis. CBN is synthesized with the degradation of THC over time. This cannabinoid is often cited as the couch-lock cannabinoid, although the particular mechanism allowing for this effect is unclear and is a point of debate between scientists.

Recent science shows that the sedative effect, characteristic of older cannabis could be a result of synergistic activity between CBN and THC, not simply the high CBN content alone. Famous cannabis researcher - Ethan Russo - suggests that the sedative effect is a result of more hardy terpenes that don’t break down over time,  Myrcene in particular, known as the couch-lock terpene.

More studies are needed to reach full understanding of the effect of these cannabinoids in isolation and as part of the Entourage effect. This doesn’t stop interested consumers from trying the therapeutic qualities of CBN.

THCV or tetrahydrocannabivarin is one of the first minor cannabinoids to spark wide interest, due to its unique effect compared to other phytocannabinoids. Similar to THC, THCV is biphasic - it has one effect in small doses and a completely opposite effect in higher doses.

We’re just recently learning about the brand new minor cannabinoid Delta-9-THCP or tetrahydrocanabiphorol. This new THC metabolite is first isolated in 2019 [1] , along with a similar CBD analogue, called CBDP, and is naturally created. Until now this cannabinoid has been recognized in a single strain of hemp, so we’ll hardly see it spread in cannabis products soon.

Is that all?
The topic is hardly over with just these few examples, that’s why we’ll separate the topic into two parts. In the second part we’ll outline more specific benefits of the different cannabinoids and we’ll discuss their application in current, and potential future medicine.
References
1 Citti, C. et al, “A novel phytocannabinoid isolated from Cannabis sativa L. with an in vivo cannabimimetic activity higher than Δ9-tetrahydrocannabinol: Δ9-Tetrahydrocannabiphorol”, Sci Rep. 2019; 9: 20335. Published online 2019 Dec 30.